The aim of this study was to compare imprint and spreading techniques for the isolation and identification of colonies of pathogenic and non-pathogenic fungus in the claws of semidomiciliated cats. We evaluated 150 felines, subdivided into three groups. In the first and second groups, the animals were submitted to the imprint technique in Petri dishes containing Selective Mycobiotic Agar: 50 animals underwent antisepsis of the claws of the thoracic limbs and 50 underwent antisepsis of the claws of only one of the thoracic limbs. The third group (50 animals) was submitted to the spreading technique, whose material was collected by rubbing a sterile swab moistened with brain-heart infusion broth, in the claws of the forelimbs, where an aliquot of the material was transferred to Petri dishes containing Selective Mycobiotic Agar. The material was stored at 25ºC for 30 days. The readings were performed on days 05, 07, 15, and 30 post incubation. Using the imprint technique performed under the conditions of this experiment, we were not able to isolate and identify the colonies because since day 05, they were overlapped, making isolation and subsequent identification impossible. From the spreading technique, Mucor sp. (54,34%), Rhodotorula sp. (28,26%), Fusarium sp. (21,73%), Aspergillus sp. (21,73%), Trichoderma sp. (19,56%), Penicillium sp. (19,56%), Cladosporium sp. (10,86%), Rhizopus sp. (8,68%), Acremonium sp. (6,5%), Exophialia sp. (6,5%), Paecilomyces sp. (4,34%), Trichosporon sp. (4,34%), and Geotrichum sp. (2,17%) were isolated. It was concluded that the spreading technique proved to be useful in isolating fungal colonies from feline claws. 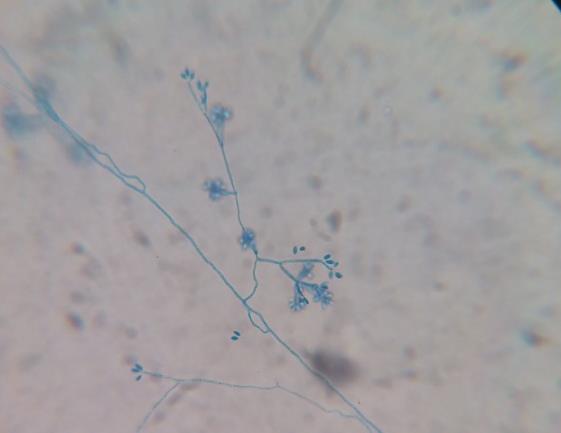